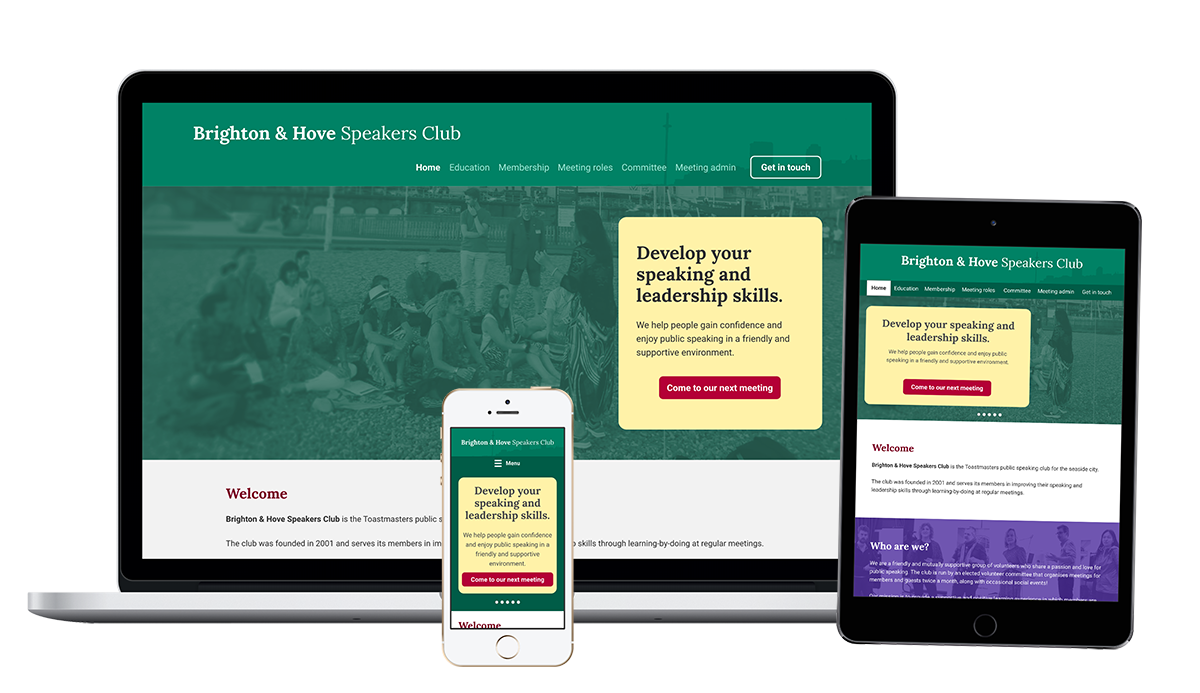 I undertook this voluntary project to refresh the online presence for a local public speaking club.

The Brighton & Hove Speakers Club (brightonandhovespeakersclub.com) is a not-for-profit organisation that is run by volunteers to help its members develop confidence in communication through public speaking.

I had the opportunity to rework their entire online presence and address the needs of visitors and members. We set out to understand what people needed to get the most out of the club and improve member retention and engagement.

I initially went into this to repair the club website after it stopped working in late 2019. The website had seen multiple facelifts since its launch in 2012 but had fallen into disrepair. The version of the site I encountered directed to a rudimentary holding page, with little substance except keeping the shop window open for visitors to find out about the club.

The function of an online presence for any organisation is to help them connect with people and provide services they need. I saw a potential for the club to serve the community better, given the niche it has in the city.

My research began the design thinking process to discover the goals and pain points from people at the meetings. It kicked off with informal conversations with organising members to learn about their views on club activities. I asked questions unrelated to the website and more on their understanding of any ongoing issues and expectations at the club. Their responses helped me to plan research questions and possible methods of getting answers.

I chose this early stage to reinstall WordPress and create a temporary website for the club while I carried on with the research. I intended this to send out a “business as usual” message from the club with a published set of meeting dates. 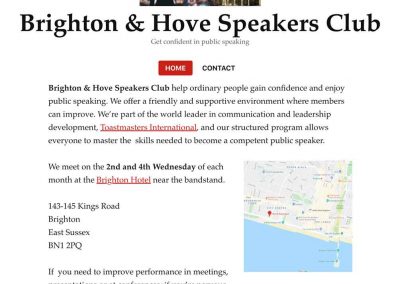 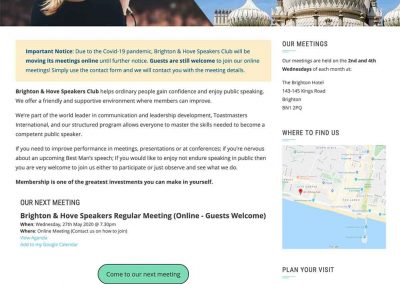 To understand the needs of the website from current and prospective members, I wrote a visitor survey and handed-out copies to people as they came to the club. I was able to collect responses in three meetings before the club went online owing to the Covid-19 pandemic. I also included contact form enquires and membership application forms as additional sources. 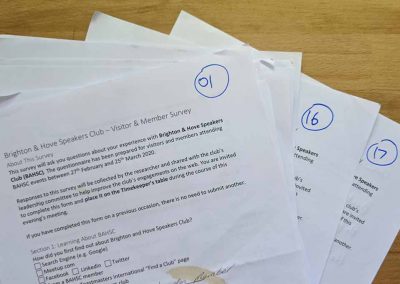 In learning how clubs like ours address the needs of their audience, I examined the online presence of 15 other public speaking clubs around the UK. The analysis entailed taking stock of the features implemented on their websites and as well as their social media content. Out of curiosity, this also included older versions of the club website recovered from the Internet Archive (Wayback Machine).
What I extrapolated from this were a set of habits that the largest clubs in the UK used. On the other hand, the results of the social media comparison were inconclusive as I did not find correlations between the size of a club with the data collected.

The research I gathered up to this point went a long way to suggest answers to my research questions and define the problems in an actionable way. I went on to present this to the committee and members.

a. What do visitors set out to achieve with the website?

b. How do people find out about the club’s meetings?

c. What does the club do to engage with its audience, outside its meetings?

d. How do people get involved in taking speaking roles at our meetings? 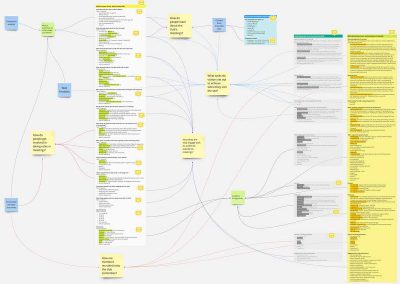 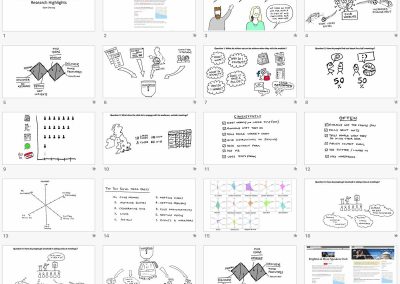 The visitor survey and membership forms collected demographics information with a wide range of occupations that helped me to create personas of our prospective audience. 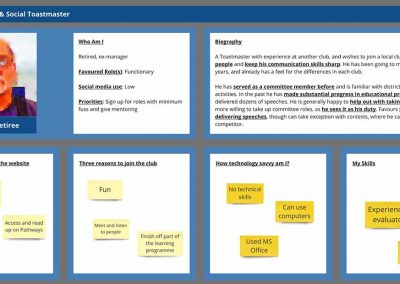 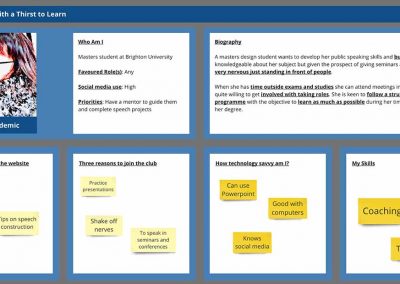 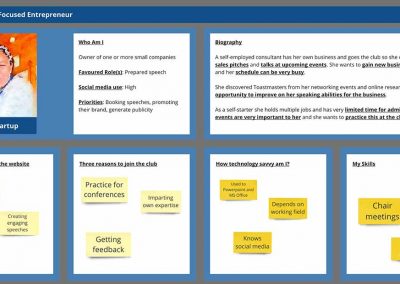 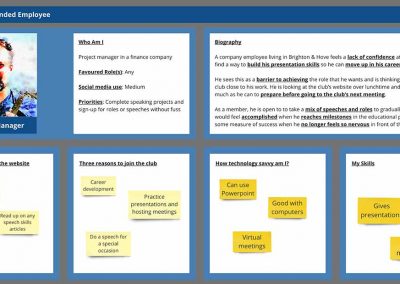 I combined personas and insights to create a set of statements that described the problems and used “How might we…?” statements as a basis for designing solutions. A brainstorming session with committee members helped generate a list of features to consider for implementation.

My next step was to understand the relative importance of each of the features by putting them to the members. I created a SurveyMonkey survey for members to rank these features according to how valuable they were to them. At the same time, I weighed up the effort to implement these features using my experience as a web developer. The result was a Value/Effort matrix that I can use to scope and prioritise the site development. 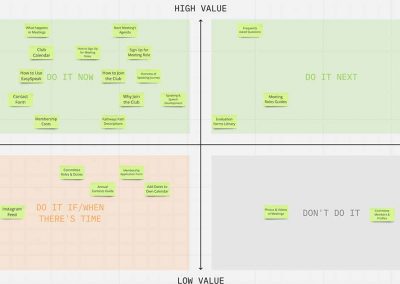 I ran two card-sorting exercises, once again with the members. The first was an open card sort, where I listed the prioritised features and asked them to group them in the way that was natural to them.
To help me process the results (as they were quite mixed), I systematically arranged the groupings visually to look for similarities in the language used. Out of those results, I then ran a closed card sort with a separate group of members to confirm the information architecture for the site. 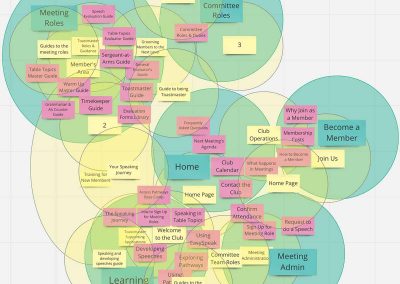 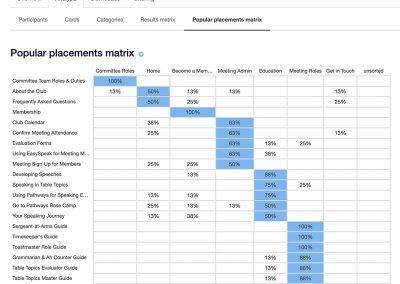 Since the beginning of the project, there were constraints that our design had to adhere to, chief amongst which are the external sites that the club uses to manage meetings and online learning. As some of the tasks that users wanted to achieve involved connecting to these external sites, I focused on those scenarios for my user flow designs.
During wireframing, we wrote the actual copy for inclusion in the final web design, mainly to put a focus on the content impact and lend authenticity to the user testing. Recruitment for the user testing, however, was slow and decided to postpone the user testing to move onto prototyping. 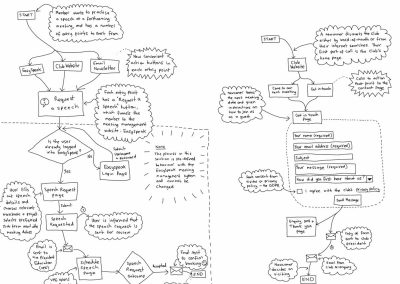 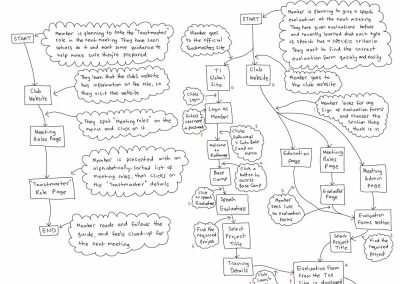 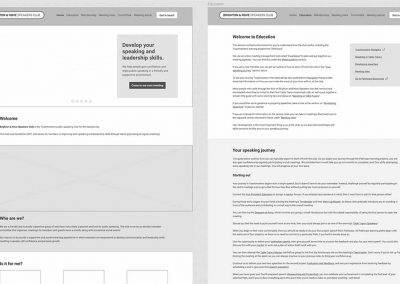 The first step I took for prototyping was to decide whether to use the branding from the organisation with which the club is affiliated or use custom styling.

I picked out colours and fonts that I felt represent the vibrance and colourfulness of the seaside city, then laid out both stylings for comparison. The city of Brighton and Hove has an image of creativity and independence, so we opted for the custom styling in keeping with that spirit. 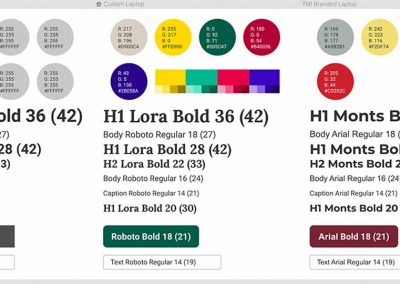 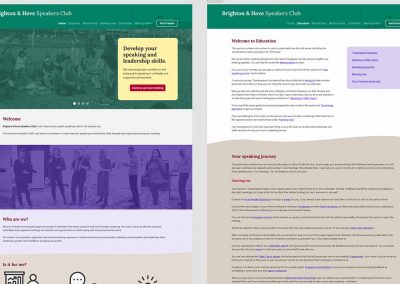 I chose to use the Divi theme for its rapid WYSIWYG editing for responsive sites and easy portability. The first iteration of the site went live on 1st July.

Recruiting took longer than intended, but we managed with three testers who did their testing with the live site. In the test, I asked them to navigate the website to complete a set of tasks, while I observed their screen behaviour and their thoughts out loud.

The rate at which they completed tasks was high on all except one, where they had trouble locating information on where to download some forms. I noticed that they persisted by navigating to alternative pages rather than scroll further the page (where the content was).

I resolved this by adding “quick links” sections at the top of each page, saving users the need to look through for the information. I confirmed this with additional tests.

Here is a round-up of the deliverables included in this project:

What would I keep doing?

What should I stop doing?

What could I start doing?

What were the challenges in this project?